The 16 Most Legendary Stories Of Gambling In Sports

by COREY NACHMAN AND DASHIELL BENNETT 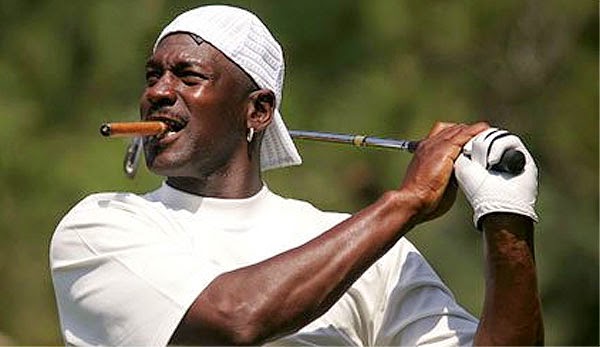 It's no coincidence that the most successful athletes are the most competitive. That's what makes  them so rich.

Unfortunately, the only thing that comes close to duplicating that rush of their athletic exploits is putting that money on the line.

A lot of money.

That's why it's not surprising so many athletes love to gambling ... and develop gambling problems Risking it all on one play is what these ultra-competitors live for.

Of course, it usually doesn't end the way they imagine it will. We gathered some of the most legendary tales involving prominent athletes and their wagers, ranging from the insane, to the silly, to the tragic. 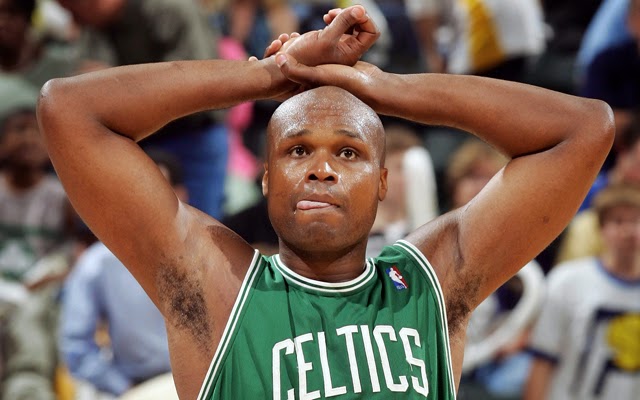 Antoine Walker made more than $100 million in his career, but lost nearly all of it through extravagant spending on custom suits for every game, dinners for his entire team, financially supporting up to seventy of his friends and family members, and, of course, gambling.

Walker had racked up $822,500 in gambling debts between three Las Vegas casinos, and when he tried to pay off the debt using a checking account with insufficient funds, he was arrested. At a casino. 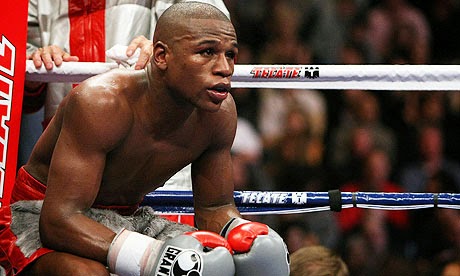 Those are just the bets we know about (and that's he's won.) It's a good wager that his gambling goes much deeper than that.

An MVP Is Kicked Out Of Football 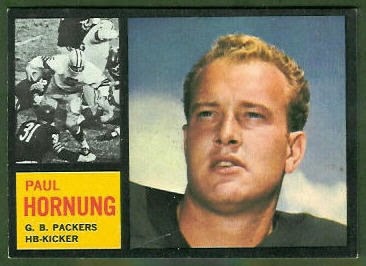 Paul Hornung was a Heisman Trophy winner and NFL MVP in 1961, and was a member of four World Champion Green Bay Packer teams, including the first Super Bowl winner.

But Hornung missed the entire 1963 season, along with fellow NFL star Alex Karras, when he was banned from the league for betting on football games. Hornung and Karras both bet between $100 and $500 on multiple NFL and NCAA games.

Hornung apologized and swore off gambling, but credits the lobbying of coach Vince Lombardi for getting him reinstated to the league. 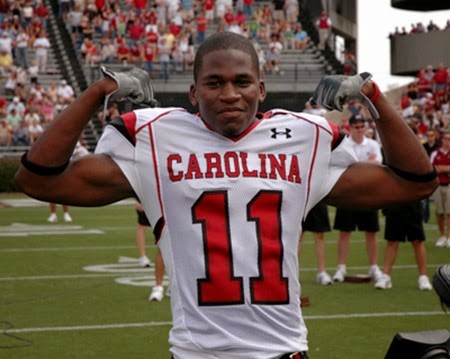 Kenny McKinley was a young and talented Broncos receiver who killed himself last fall, shortly after an injury ended his football season.

It was later learned that had borrowed $65,000 from a former teammate to payoff his extensive gambling debts, including $40,000 owed to Las Vegas casinos, and the mounting money problems had contributed to his depression. 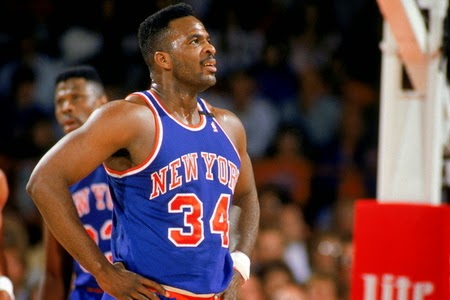 Toronto's Charles Oakley and Philadelphia's Tyrone Hill were both kicked out of a 2000 preseason game when Oakley slapped Hill in the mouth during warmups,

Later that same season, Oakley was suspended again after throwing a basketball at Hill face during a shootaround. Hill eventually settled up, but because of his "coward move," Oakley insisted that he pay double. 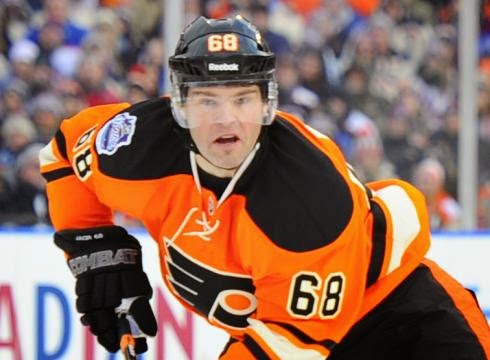 When he stopped making payments on his debts, the owner of the site leaked the story to the media. Jagr immediately restarted payments, and thanks to the public shaming, the debt was eventually settled.

He had also settled an additional $350,000 debt with another gambling enterprise and fought with the IRS, who issued a $3.27 million lien against him in for his unpaid taxes back in 2001. 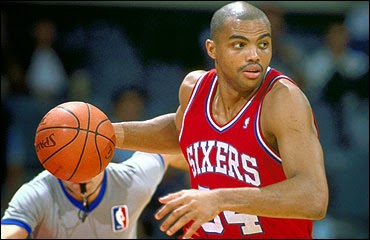 In 2006, Charles Barkley admitted to ESPN that he feels that he has a gambling problem that had cost him close to $10 million

A year later, Barkley told ESPN he won $700,000 in one weekend betting on the Super Bowl and playing blackjack. He also claims he once lost $2.5 million in six hours.

In 2008, Barkley almost faced formal criminal charges over a $400,000 debt to the Wynn Casino, which he promptly re-paid. A little later that year, Barkley said that had sworn off gambling at least temporarily.

However, even though he admitted to being addict, Barkley has said that he doesn't need to quit because unlikely some people he can "afford to gamble."

The Mets' Man On The Inside 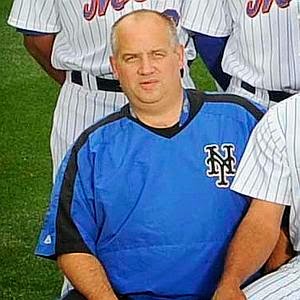 Longtime New York Mets clubhouse manager Charlie Samuels is currently under investigation by the NYPD and the Queens DA for betting on baseball games, organizing a gambling ring, providing insider tips in regards to each game, and using the Mets bank accounts to cover his own debts.

He is also being investigated for stealing memorabilia from the team to sell to collectors.

The Mets only paid Samuels around $80,000 a year in salary, but his tax forms indicate he had an income of at least eight times that. Wiretaps have produced recordings of Samuels making illegal bets on various sports, and mob associates talking about how helpful Samuels' inside information is.

Samuels was fired at the conclusion of last season after the investigation became public. 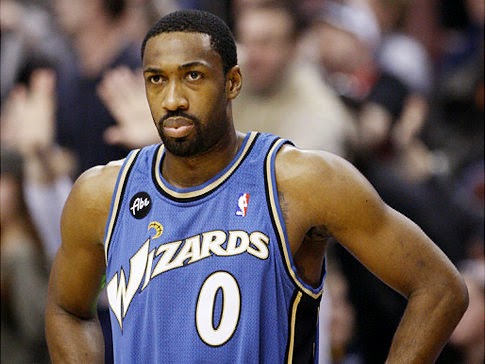 A road trip card game turned ugly with, according to the sources, Arenas tried to get out of paying Crittenton a $25,000 pot.

When Crittenton threatened to shoot him in the knee, Arenas brought three loaded handguns into the Wizards locker room, placed them in front of Crittenton's locker, and left a note reading "pick one."

Crittenton allegedly drew his own gun (or threw one at Arenas, depending on who you believe.)

Arenas was charged with possession of an unlicensed pistol, which is a felony in Washington D.C., and he ended up getting a sentence of two-years probation and 30 days in a halfway house. Crittenton was given a year probation for his role in the incident. 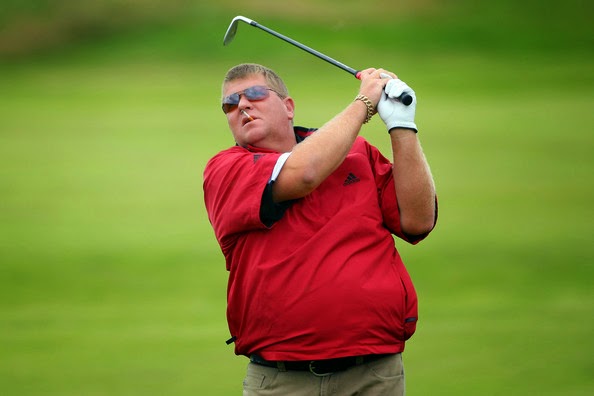 John Daly has what one might call "an addictive personality." The man with one of the longest drives on tour has also had long battles with alcoholism, weight management, and gambling, which estimate say has cost him between $50 million and $60 million over 12 years.

He once lost $1.6 million in five hours, after taking the the prize money from a second-place tourney finish and pumping it into $5,000 Las Vegas slot machines.

One of the great urban legends of professional sports history (that many believe could actually be true) is that Michael Jordan's first retirement from basketball in 1993 was not a retirement all, but a secret forced suspension brought on by his excessive gambling habit.

Prior to winning his third NBA Championship, Jordan was spotted gambling in an Atlantic City casino the day before an Eastern Conference final game against the New York Knicks, and had paid two childhood friends a combined $165,000 in gambling losses accrued on the golf course and the card table.

So the theory goes that Commissioner David Stern needed to send a Jordan a message, but rather than embarrass him or the league with a ugly suspension, allowed his best player to "retire" gracefully, before returning to the game 18 months and a short minor league baseball career later. 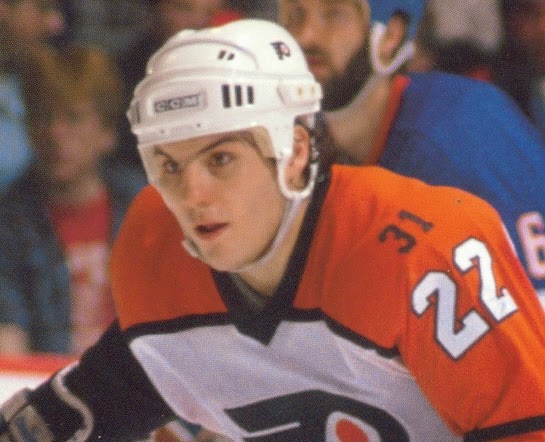 Rick Tocchet was a former NHL player who ran a gambling ring that took bets from NHL players, while he was an assistant coach of the Phoenix Coyotes. (The wagers were not made on NHL games.)

Tocchet plead guilty and was given two years probation. He was temporarily banned from the NHL, but has since been re-instated, and even returned to coaching.

Adding to the intrigue was the potential involvement of his boss, Wayne Gretzky, and Gretzky's wife Janet Jones, who admitted placing bets with Tocchet. (Both were cleared of any wrongdoing.) 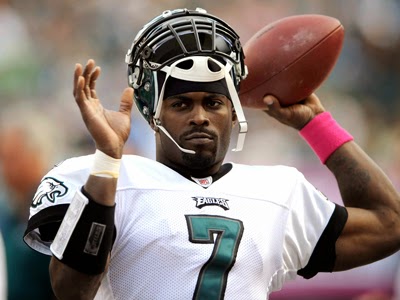 Michael Vick's bankrolling of the Bad Newz Kennels dog fighting ring was one of the most appalling stories in sports history.

Vick's plea bargain indicates that he did not place any bets, even though a source to ESPN claimed to have seen him bet up to $40,000 on a single dog fight. The district attorney involved in the Vick case also believed that Vick did place bets on dog fights.

Vick spent two years in prison, lost all his endorsements, and had to pay back some of his contract to the Atlanta Falcons, eventually filing for Chapter 11 bankruptcy.

Vick's public image is still fairly tainted, but his standing has improved since signing with the Philadelphia Eagles and winning the NFL's Comeback Player of the Year in 2010.

Pete Rose Is Banned For Life 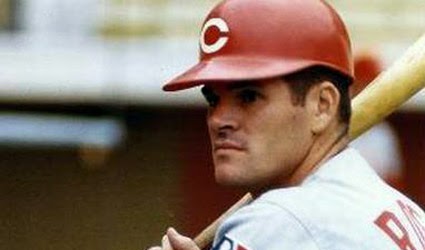 Right before the 1989 season, new baseball commissioner Bart Giamatti hired a lawyer named John Dowd to investigate allegations that the manager of the Reds had bet on baseball games.

Rose eventually agreed to accept a permanent lifetime ban, believing he wouldn't have to admit to betting on baseball, but would be allowed apply for reinstatement in one year. Eight days later, Giamatti died of a heart attack and Rose's reinstatement was rejected by his successor Fay Vincent.

He remains permanently illegible to work in Major League Baseball or be considered for the Hall of Fame. 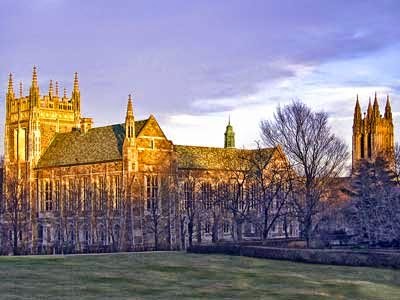 College basketball has been the target of numerous point shaving scandals throughout its history, as unscrupulous gamblers find unpaid college kids easy to bribe.

The two most famous and widespread scandals involved the CCNY point shaving scandal in 1950-51. That operation involved seven schools, including four from New York City, and a total of 33 players..

The Boston College point shaving scandal of 1978-79 was more localized, as it only involved gamblers convincing some BC students to not cover the spread in nine of their own games. One of the organized crime figures involved was Henry Hill, who was the subject of the movie, "Goodfellas." 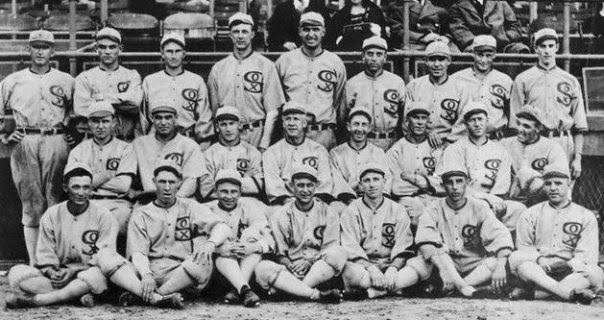 The fixing of the 1919 World Series is still the most infamous sports gambling moment of all time.

Eight White Sox players were paid a total of $100,000 to purposely lose the Fall Classic, so gamblers could clean up betting on Cincinnati. The players were easily convinced due to their hatred of owner Charles Comiskey, who was notorious for underpaying his players.

Although the "Black Sox" — including the legendary "Shoeless Joe" Jackson — were found innocent of any crimes by a grand jury, Commissioner Kenesaw Mountain Landis banned them from baseball for life, a ban that stand to this day.
Posted by Unknown at 13:27