Sure, you know that a pair of aces are the best hand in Texas Hold'em, but do you know the worst starting hands? Knowing that these hands are almost-always-fold'em hands in hold'em is just as important to improving your poker game and not playing like a donkey.

Some of these "worst hands" are bad in the same way and will lose at about the same rate, so I've called them ties, even when one is a slightly better hand. 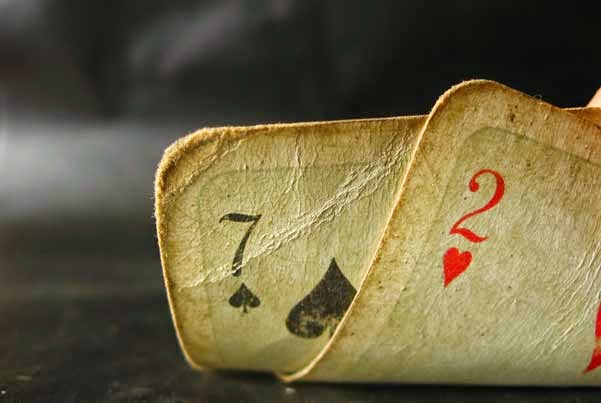 7-2 off suit is considered the worst hand in Texas Hold'em. They are the lowest two cards you can have that cannot make a straight (there's 4 cards between 2 and 7). Even if they are suited, they will make you a very low flush, and if either pairs, it's an awfully low hand.

Because it is the worst, some players will play it for fun and in online games, it is known as "the hammer."

This is the same basic problem as above, only you've got an 8 instead of a 7. Still pretty bad for a high card. Suited or not, this is a fold'em hold'em hand.

The 3 makes this hand able to beat the two above it, but with the 3-8 you still can't make a straight and the 3-7 still, well, just sucks.

While if the board gives you a miracle flop of 3-4-5, you will have a straight, someone with a 6-7 will have a higher straight. If you get a flush, someone will probably have a higher flush. Against even 4 players, this hand will lose about 90% of the time. Not good odds.

The only thing these three hands have going for them over the hands above is the 9. If the 9 pairs, you'll have a middle pair that could still be beat by anyone holding pocket 10s, jacks, queens, kings, or aces, yet you might be fooled by a board filled with low cards into thinking you have the best hand and losing a lot of money. No straights can fill the gap between these cards, either. Beware.

This hand has a legendary quality because Doyle Brunson captured two World Series of Poker Bracelets with it. But it's not a good hand -- Doyle Brunson is one of the all-time best in the game and unless you're a Texas road gambler who's logged thousands of hours at the table, you shouldn't try and win with the Doyle Brunson.

Another hand people play because it's fun is the old 9 to 5, the "Dolly Parton." If you're playing to win, it's not a good idea to play hands because they have a funny name. That may be how you pick the winning horse in a race, but poker's a marathon, not a sprint, and over the long term there's no doubt this hand is a statistical loser.

All these hands will rarely win, especially unsuited. Toss 'em. Just toss'em. Yes, even in the little blind. If you see two low cards in the hole, unless you're in the big blind and you can see the flop for free, fold.

One of the most common mistakes I see beginners make is that when they see any paintin their hand, they play it. J-2, Q-3, K-4 whatever -- and most of these hands are losers. They're junk that may win a few pots, but more often will lose you huge cash when you find the other player has a higher kicker and the winning hand.

This is another common beginner mistake, playing any ace. Again, it may win occasionally, and heads-up it's a fine hand, but at a table of 4 or more, this hand shouldn't be played if there's a raise in front of you. You're going to be outkicked a lot with Ace-little, and it's going to feel like a kick in the junk when the other player shows their higher ace.
Posted by Unknown at 16:17